A half of a year old already! Where does the time go?!

She:
– Weighs 18lbs, 3oz, according to her 6-month immunization appointment last week. She has her 6-month doctors appointment next week, so we’ll have another measurement then!

– Is “a little tall!” WHAT? Kyle and I are the shortest people I know, so to have the nurse tell me that Isla is a little tall is AMAZING. Really, she’s only 27″, but still – Genetic anomaly? Let’s hope so!

– Is getting pretty good at eating her rice cereal. She’ll open up her mouth for a spoonful of cereal and she definitely knows when she’s had enough. Usually she’ll just become distracted by anything other than her spoon.

– Sits up on her own and rolls EVERYWHERE. She’s become quite the little wiggle worm and is slowly trying to get crawling. The motions are all there, but she can’t figure out how to put them all to work at the same time.

– May or may not be teething. I say “may or may not” because I don’t see any teeth, but the drool has increased, as has the crankiness and chewing. Plus, when I try to feel her gums, she gets quite upset. Although I’d be upset of someone stuck their fingers in my mouth too, so who knows.

I:
– Am looking forward to the new year. It’s going to be filled with more firsts for Isla and I can’t wait to watch her grow even more.

– Feel less guilty dropping Isla off at any of her grandparent’s houses so I can go out and run errands. I even left her with my dad for 20 minutes so I could run to the post office. (This is a big deal because he is an awkward person around babies.) Actually, I’m pretty sure his girlfriend just played with Isla the entire time, but still. Having an assortment of grandparents around is rather handy!

– Am starting to contemplate weaning from boob to bottle. I’d like to do it before I go back to work, but I’m conflicted as to how I should do it. Formula? Pump? Ugh. I could write an entire post on the subject. (And probably will). 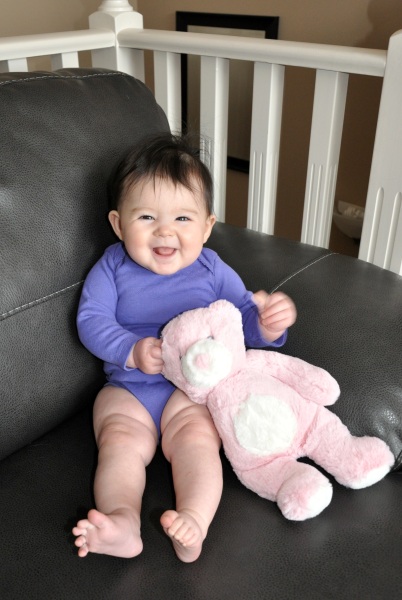