How on earth has a year gone by already? I can’t even wrap my head around how quickly my little Chubby Chicken has grown. It seems like just yesterday we were terrified new parents bringing her home from the hospital. Regardless, Happy Birthday to my little Lovey Love, my Missy Miss, my little Isla Emily!

– Loves to tear around the house with her walker and walks while holding on your hands. I’m not too worried that she’s not walking yet – in fact, I prefer it because she already gets into enough mischief crawling and using her walker! But, with the amount of unassisted standing she’s been doing, I’m sure it will only be a matter of time before she’s running everywhere. *sob*

– Still only has 4 teeth. There’s a couple teeth just waiting to bust through, but they’ve been teasing her for quite a while. We have our good and bad teething days, to say the least.

– Has had her first haircut! At the beginning of the month I finally took her to the salon to have a little trim. She did SO well and it only took about 15 minutes to trim everything up! No more baby mullet and no more crazy hair in her eyes!

The top two photos are the “before” pics and the bottom two are the “after.” It was seriously impossible to take these photos. She was a very squirmy girl that morning! The sad this is that her hair is already starting to get long again. It must grow fast like her mom’s!

– Happily feeds herself and now eats whatever we eat for dinner! So far she seems to love pasta, blueberries, steak and peanut butter toast. She took the transition to more flavourful foods very easily and was really excited to experience different layers of flavours. No more plain, boiled chicken & veggies for this little girl!

I:
– Am now starting to contemplate how insane my life may or may not become with two kids. Kyle and I know we would like at least one more (a boy), if not two (to try for a boy if attempt #2 yields us an XX). Like I said before, it still feels like I JUST had Isla, but really, a 2-year “gap” between our kiddo’s ages is what we’re aiming for. Am I ready to be pregnant again? Will the next one be the same as my pregnancy with Isla? What if it’s horrible the next time around? Ugh.

– Have adjusted to life as a SAHM. Yeah, sometimes I crave interaction with the public (“What? We need to go to the store? YAAAAAY PEOPLE!!!!”), but in the end, raising Isla the way I want to is what it all boils down to.

– Overall am loving being a mom. Growing up, bearing children was never something I dreamed of doing, nor was it something I was against, but something eventually “clicked” inside me that made my head and heart know that I wanted to be a mom. Sure, I’m not the perfect parent (who is?), but I think I’m doing a damn good job raising a pretty awesome little girl. Being able to watch Isla explore, play, and learn something new everyday is amazingly rewarding and feels so good for my soul. 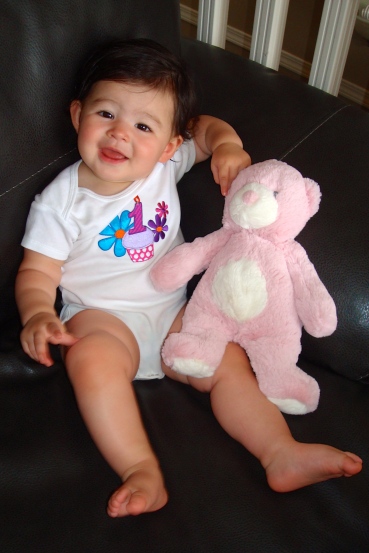