It was a freakin’ beautiful fall day for some pastries and a run! Isla has been wanting to test her legs in a 5K run, so I thought the Run 4 Donuts would be a great way for her to do that.

In a nutshell, the Run 4 Donuts is a charity run for the local food bank, and during the race you stop at donut stations to eat a delicious pastry before continuing on your way. Sounds awesome, right? (Spoiler Alert: Mowing down on donuts while running isn’t necessarily a good idea, but it’s a great motivator!)

We got to the race bib pick-up area with plenty of time to stand in the sun and warm up and before we knew it, we were munching on donuts before heading out for the first stretch of the race! Isla did great during the first lap but got pretty tired after Donut #2. (The fact that it was a Boston cream probably didn’t help either, haha.) We took a few walking breaks due to too many donuts and sore legs, but Isla finished strong and did amazing! I really couldn’t be any prouder of her. 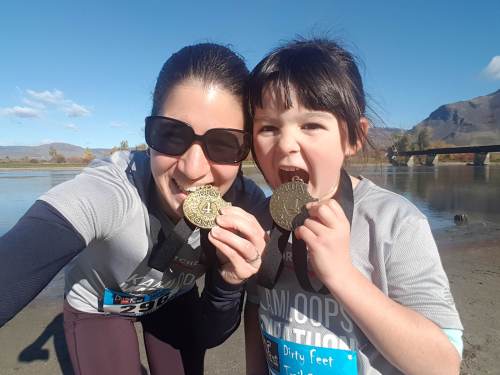 The Run 4 Donuts was a super casual yet totally fun race, and I hope we can do it again in the years to come! It was a great last race of the season, and I’m glad Isla got to join me!

Of course, here’s all that technical stuff just for curiosity’s sake ;)

Thanks to Dirty Feet for organizing and putting on such a great event to support our food bank!

A special visit with the Big Guy himself today. ❤️🎅🏼❤️
Who are the best-good office doggos?!? 💙❤
It warmed up (by Canadian standards, anyway) so this dink of a dude got to go do the @dirtyfeetraces Mile a Day Challenge with me.
Screw this tree star and the ship it flew in on.