This past Sunday I managed to make my way up to the rainy mountains for the Dirty Feet Sun Peaks Trail Run!

It was my second time running this race and I almost, ALMOST, signed up for the 10K distance but chickened out changed my mind at the last minute. I’m glad I did because judging by the way my legs still feel three days later … another 5K on top of what I did probably would have made me wheelchair-bound.

Anyway, I drove myself up to the mountain in time to pick up my race package and had about an hour and a half to kill before I had to line up at the start line, so I treated myself to a light breakfast at Cahilty Creek Kitchen restaurant. It was lovely eating in relative peace and not having to tell a tiny human to sit nice and eat their dang food! I had poached eggs with a slice of bacon, a sausage link, toast, and fruit, and it was just enough to fuel me up without weighing me down! I highly recommend stopping there for breakfast if you’re ever up at Sun Peaks. (Their regular menu looks pretty awesome too, IMO.)

After breakfast I wandered back to my car to stay warm and dry before the race. It was pretty wet in general all weekend, but thankfully the rain subsided just enough to make it not completely horrible by the time the 5K runners had to start. (I can’t say the same for the 1/2 or Full Marathon runners though!) I eventually crawled out of my warm car and met up with some fellow running folks I knew from town before getting ready at the start line!

Overall, I felt pretty good during the race. The mud wasn’t too terrible, although there were a few spots where it was pretty slick and I had to slow down a bit so I wouldn’t slip and fall. As it turns out, adjusting my gait/stride for the mud wrecked havoc on my knees and they’re pretty dang sore. The more you run the more you learn …

I don’t know if it’s the course itself or if the mountains just play with the GPS function, but it always clocks this race at just under 5 km. Whichever it is, you can totally tell by my splits where the uphill battles were, and where I had the privilege of coasting downhill.

All things considered, I’m pretty happy with my final time of 31:36. I was aiming to beat my time from last year’s race, and I think it definitely could have been possible had the trails not been so muddy! I’m looking forward to next year’s event already!

It was an amazing day for the first trail race of the year on Sunday! The North Face Dirty Feet Trail Race #1 took place in the beautiful grasslands of Kamloops and I was pumped to get going!

After dropping the girls (and dog) off at my mom’s I headed over to the shuttle location to hitch a ride up to the start/finish line. The energy was great on the bus and thankfully it was a short trip as I don’t think I could’ve handled going a long way down that road without Gravol …

Anyway! After I got checked in I had quite a bit of time to kill before the 5K runners departed. We cheered on the half-marathon runners who came through and I caved and ended up buying a Dirty Feet hat for future runs. I ended up chatting with an acquaintance and I ended up running with him a bit during the race.

Overall, I felt just “okay” during the race! I definitely didn’t train enough for hills and got a little too ambitious off the start; I ended up powering out a little after the first kilometre and had to dial things back a bit, but I managed okay! There was definitely zero gas left in the tank when I finished, haha.

My official time was clocked at 31:58, so I’m pretty content with that, all things considered! I stuck around for door prizes and managed to have my number called, so I chose a pretty awesome shirt, and then it was time to hobble up to the bus to get back to my truck.

Oh, and an added bonus? Zero ticks hitched a ride on me during the race! Seriously, I was more concerned about ticks than the difficulty of the trail!

As always, a huge shout-out to Phil, Grace, and the whole Dirty Feet crew for an awesome race!

Remember that one time when I said that the Run 4 Donuts was going to be my last race of the year? I liiieeed …

I heard about Brennan’s Ugly Sweater Run back in September, I believe, but it took me a while to decide whether or not I wanted to participate. (I had no ugly Christmas sweater, after all!) After canvasing social media to see if someone wanted to join me, my mom said she’d come as long as she could walk, and I told her she could as long as she didn’t mind if I ran. She didn’t, so finally at the end of October we registered! Isla even decided to join in, so she walked/ran with my mom.

A little back story on the run itself: It’s a 5k Fun Run organized by a young lady (Payton) whose brother was killed by a drunk driver when he was 10 years old. He was a lover of all things Christmas, so in honour of him, Payton created Brennan’s Ugly Sweater Run, with 100% of the proceeds going towards the Boys & Girls Club Power Start Program. 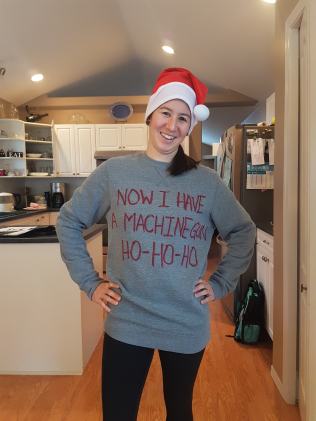 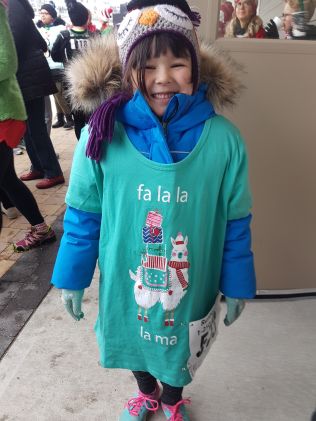 Our “ugly” sweaters! A homage to John McClane and a sweet little llama!

We had been fortunate enough to have really nice weather so far, but alas, on Thursday we finally got a little dump of snow. Thankfully, the weather stayed relatively decent, so the trail/path we would be running on was mostly clear of snow and ice. The only downer was that on run day the wind had picked up and it was fairly chilly, but once we all got moving it wasn’t so bad. (Thank goodness I opted to squeeze a Santa hat on my head, or else my ears probably would’ve froze off.)

I’m so thankful that the ran was being hosted close to my house on a trail/path that I’ve ran before, so I knew what to expect! The hills were tougher in the cold, but manageable, although having to slide down a path to get to the trail wasn’t ideal. (No fault to the race organizer – Mother Nature doesn’t care about your plans!) I believe Isla slipped a couple of times, but she insisted on finishing the race, much to my mom’s dismay, haha. (The race was two 2.5k loops, so instead of stopping after 1 loop like many of the other walkers, Isla protested and said they HAVE to finish properly!) 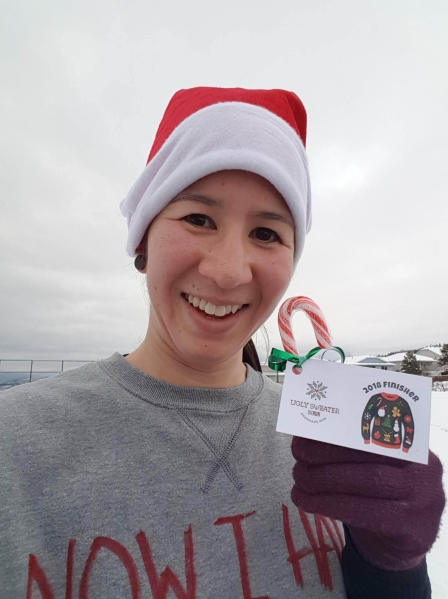 I finished with a time of about 35:15, which I’m pretty happy with considering the weather, course condition, and the fact that I made the silly decision to try out weight training the Friday before the race and exhausted every muscle in my body, haha.

I’m looking forward to next year’s Ugly Sweater Run already and want to congratulate Payton on a job well done in honouring her brother! The support from the community for the race was unbelievable for it only being the second annual event, so it will be exciting to see where this goes in the future!