I’ll be completely honest – I was actually looking forward to waking up this morning. The Daylight Savings change kicked my butt yesterday, and since today is my first Monday off since January, I welcomed this morning with open arms!

I finished my contract at the university on Friday, so today marks the start of getting things back to normal. No more 6 a.m. alarm clocks! No more rushing to get Isla fed, dressed and out the door! I can now go back to being a stay-at-home mom, something that I now realize that I actually enjoyed. I missed Isla’s antics – both the hilarious and the hair-pulling ones. I get to take in a lot more of this every morning: 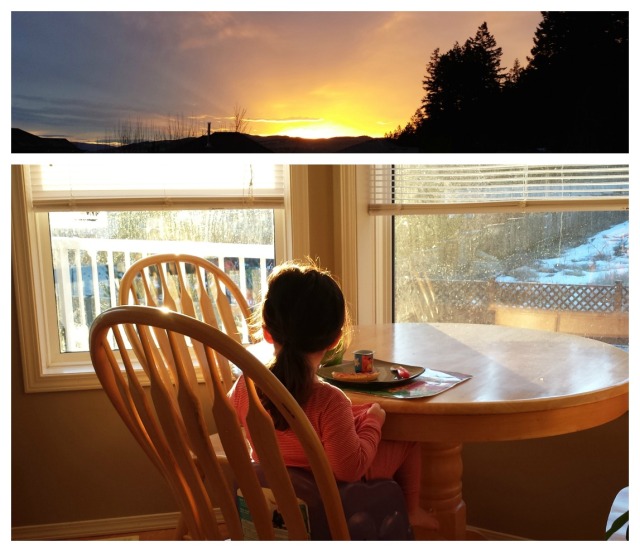 Working for the past 9 weeks has been good; Kyle and I have managed to pay off a good chunk of our new (to us) truck and at the rate we’re going, we should hopefully have it paid by the end of the year. Working did, however, have some negative effects.

Isla regressed a little bit in the potty training, and me heading back to work definitely had something to do with it. She went from lazy mornings to “get up and go” ones, we cut out her afternoon nap (which needed to be done anyway), and the rules she had to follow were always changing – Grandma’s House rules are always the best ones, afterall.

I’m taking this first week of “Back to Normalcy” to do just that – to not do anything too outgoing, but to instead just get things back to normal. I’ve gone back to handing out treats for potty time success. We had a wonderfully warm weekend and Isla was a star, so I’m hoping I can keep it going.

I really do appreciate going back to work, don’t get me wrong, but I think that perhaps just for now, being a working mom just isn’t for me. I’ll eventually go back to hating Mondays, but for today, I’m welcoming it with open arms.

1. Getting back into freelance writing after nearly a year of not doing any work.

3. Lake day tomorrow with my husband and kiddo.

4. Isla cutting teeth = No more pain in her mouth, at least for now.

What are you happy for today?

– Halloween was last week and it went fairly well! I was worried about having to nurse Isla in the middle of doorbell ringing, but her schedule for the day worked out so she ate just before it all started. Whew! We got 99 trick or treaters at the door and we probably would have had more but I had to turn the lights out around 8:15 since Isla needed her “bedtime snack.”

– I dressed her up as a little pumpkin. I wanted to get her a cute costume, but opted for a cozy onesie instead. Next year we’ll do something more special, since I’ll probably take her trick or treating.

– We’re finally going to have our family photos done this Friday. We were supposed to have them done a couple weeks ago, but got rained out. So far the forecast for Friday is looking okay, so fingers crossed!

– Can someone please explain to me what BB cream is? Apparently it’s the “greatest thing” but I have no idea …

– I went to a craft fair yesterday. Apparently I’m an 80-year-old woman.

– Last week I helped my Grandpa buy himself a new laptop. I’m glad I went with him, because the sales guy was trying to sell him a ridiculously overkilled unit for a couple hundred outside of his price range. Douche! We got him a mid-range PC that will work just fine. I’m quite pleased with myself for telling the sales guy to get bent.

– I re-potted my ficus plant on Friday and Kyle’s certain that it’s going to die as a result, mostly because I suck at keeping plants alive. But this little fella is a trooper! He’s survived four moves, so I think he’ll be just fine :)

– Kyle and I went out for dinner – with Isla – for the first time since she was born. Isla did pretty good! She got a little fussy because she was tired, but she eventually fell asleep. It felt awesome to go out and eat dinner at a restaurant.

Spider Girl, is that you? 🕸
Super surprised the girls with Cirque du Soleil OVO tickets this afternoon! They were speechless and the show was AMAZING! 💚🐛
When the world is heavy, buy some flowers.
The best good boy came to the office today on a whim and ironically enough, it turns out to be Bring Your Dog to Work Day! Here's to my favourite part-time coworker 😘