At the beginning of the year I had set some pretty big goals for running, but after a lot of contemplation, I re-jigged them into something more achievable. Originally I set my sights on completing a half-marathon by the end of this year, but now I’m aiming at simply upping my distances and completing eight races in the Kamloops Run Series.

This year, much like last, we kicked off the 2019 running season at the Spring River Run Off race, hosted by the always amazing Kamloops Ridge Runners. This would be my first kick at completing a race at the 10km distance, and to say I was nervous would be an understatement. Lucky for me, Kyle decided that he’d hang out at my pace and kept me going pretty much throughout the whole race. 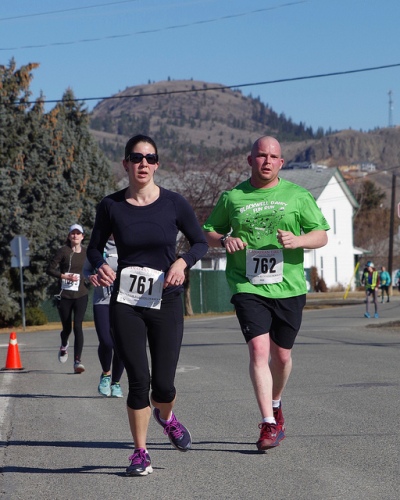 We were called “The Cute Couple” but this photo is everything but cute, haha! (Photo by David Graham)

Overall, I felt really good throughout the whole race! My knees started giving me a pretty hard time somewhere between the 7 and 8 km mark, but Kyle really helped keep me going and I managed to finish fast and strong with a time of 56:29 and an average pace of 5:39/km. My main goal was to finish in under an hour, and I’m pretty jazzed that I was able to crush that one!

Today my legs are pretty much dead to me, but it’s so worth it. I’m looking forward to the rest of the race season, and being able to confidently accomplish longer distances!

One thought on “Race Recap: The Spring River’s Run Off 10K”

Super surprised the girls with Cirque du Soleil OVO tickets this afternoon! They were speechless and the show was AMAZING! 💚🐛
When the world is heavy, buy some flowers.
The best good boy came to the office today on a whim and ironically enough, it turns out to be Bring Your Dog to Work Day! Here's to my favourite part-time coworker 😘
I still cannot comprehend how this happened 😭