Whew, what a weekend! Lets just jump right into the recap, shall we?

Friday
Norah had her 1-year immunizations in the morning. She had four pokes in total (two in each arm), but I was pleasantly surprised that she barely fussed over them! Even the nurse who administered them was amazed by how well she did. After her shots we stopped by the post office to pick up our new mail keys as a new mailbox was installed, and then we headed home.

While Norah and I were out, Kyle and Isla started on making the cupcakes for the birthday party on Saturday. Kyle had to go out and help do some landscaping in the afternoon, but by then the cupcakes were cool enough to ice.

You guys, icing those cupcakes was THE WORST. While I enjoy baking, I’m horrible at the decorating part. I started off with good intentions – I made a white chocolate buttercream icing – but as I started piping it onto the cupcakes it looked awful and only iced 8 or 9 cupcakes. I didn’t have enough icing (or patience) for the other eleventy-billion cupcakes, so it was plain vanilla buttercream icing slapped on with a butterknife. Oh well.

Saturday
Party day! In the middle of the night the “Balloon Fairy” covered Isla’s floor with balloons and surprised her when she woke up! She was SO excited and couldn’t figure out how all the balloons got there.

Kyle and I spent the morning giving the house a quick clean and doing some final food prep before Isla and Norah’s guests arrived.

In a nutshell, the girls both had a blast and were both exhausted by the end of the day, so I think the party was a huge success. They’re both so lucky to have such amazing family and friends in their lives. 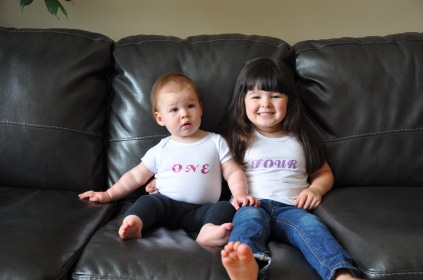 Sunday
We headed out to the grocery store as a family to get the shopping done for the week and caught the Blue Jays game on TV before heading outside and enjoying some of the beautiful weather! The girls had fun playing in the yard until I had to get ready to head out for ball; they both went to my mom’s for dinner and Kyle puttered around the yard some more.

I’m pretty sure I got a bit of a sunburn while playing ball – I totally forgot to toss sunscreen into my bag. Oops! It was bloody hot outside too. We ended up losing one game and winning the other, but it was still a good time!

After ball I picked up the girls, and they both crashed out hard on the way home.

I’ll do another post with more birthday pics tomorrow ;)

How was your weekend?