Krysten at Why Girls Are Weird did this fun little post last week and I just couldn’t resist doing it as well!

I really enjoy the neighbourhood I live in. While we get a couple “extra” weeks of winter up here (it will snow here and rain everywhere else in the city), it’s very family-friendly and people are generally friendly. One of my actual neighbours is pretty great. The other ones … we tolerate … 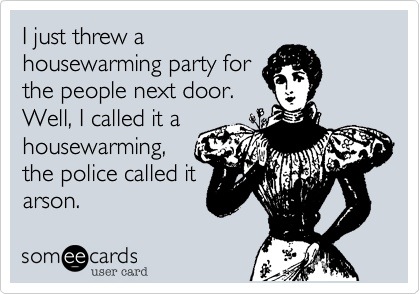 Okay, it’s not that bad, but we can’t choose our neighbours, right? Right.

So, if we were neighbours …

You’d probably hear me yelling at the dogs. They both love being outside but with one being old and the other being, well, Campbell, it’s hard to get them to listen. Campbell has selective hearing when it’s time to come in the house, and Daphne just takes her sweet time doing anything and everything. Ugh.

You’ll smell our barbecue going in February. Almost always during the first “warm” weather weekend of the year, we’ll fire up the barbecue. We love to barbecue! So if you smell something cooking outside, it’s probably us.

You’ll hear Isla barking. Yep, my kid barks. I don’t know if it’s something she picked up from watching Paw Patrol or 101 Dalmatians, but she’ll stand in our driveway and bark. Kids, I tell yah …

You’ll see me shamelessly roll the garbage cans out in my PJs. I love the winter months because we can leave the cans out the night before pick up day, but in the summer there’s bears and we can’t put them out until the morning of. So, more often than not, you’ll see me frantically rolling the cans out at 7 a.m. in my pajamas.

You may see my husband jumping on the trampoline. Fun fact: The trampoline we have is his, not Isla’s. Kyle jumps on it as a form of exercise, so don’t be alarmed if you see him out there at night jumping away. Isla loves it as well!

You’ll probably think I’m mean to my dogs. (I’m not!) Campbell LOOOOVES to sunbathe and can’t get enough of the summer heat. He’ll lay on our back deck in the summer until he can’t take it anymore, come inside to cool down/get a drink, then beg to go back out. Daphne lives for the cold weather and it could be -20°C and snowy and she’ll just want to be outside. (I’ve actually had someone chirp at a photo I posted to a local news site of her being happy in the snow, telling me to “Get that dog in the house!”) She’s an Alaskan Malamute, she can handle herself just fine ;)

You’ll probably get baked goodies at Christmastime. I love to bake around the holidays and I’ll most likely deliver a tin to your house wishing you a Merry Christmas. I expect nothing in return – just enjoy the cookies!!

You’ll see me looking out the front window. It’s not that I “keep tabs” on what’s going on – I swear I’m not THAT neighbour – I just like to people watch! I’ve seen kids bail off their scooters after the wheel has fallen off, a dog run away from its owner after a firework was set off, kids get in trouble by their parents for hitting their car with a tennis ball while playing catch … it’s just fun to watch!

So, now you tell me – What would it be like if I were neighbours with you??

When Kyle and I first bought our place, we only had one hesitation: Strata.

Sure, that means everyone has to play according to the same set of rules, but sometimes, it’s easier not having any, or at least not have a strict set of rules. You already have to follow City Bylaws, but adding another set of underlying rules on top of that can push the limit.

One example: City bylaws say that one residence cannot own more than two dogs and two cats. Our strata bylaws only allow one dog and one cat.

Of course, there’s always exceptions made to the rules, both with City and Strata bylaws. There are some people in our complex who have two dogs, and I’m sure there’s some who have two cats.

But then there’s the people who just ignore the rules.

Example: Our strata bylaws say that you must have your dog on a leash at all times while on “community” property (Basically, anywhere outside of your own fenced area). When Kyle and I first moved in, there was a little old lady who would let her toy poodle out on the community grass (without a leash) to do its business. As a result, it came wandering over to our fence and started barking at Daphne. Because we have a completely fenced yard, it was no big deal and the woman came and got her dog. However, if we DIDN’T have a fenced yard and Daphne WAS leashed, she still probably would’ve gotten into a scrap with this tiny dog, of course making her look like the bad guy even though the lady wasn’t following the rules. UGH!

Now, I think the old lady gets that there’s a giant dog a couple doors down and I haven’t seen the dog since. Thankfully, I didn’t have to complain to the strata board that her dog was running about sans leash.

Another example: The unit next to us has no one living in it because the lady passed away a couple months ago. The unit on the other side of that unit (so two doors up from us) seems to think that they can use that parking spot as their own. Strata bylaws say you’re only allowed to park in your unit’s assigned parking, in visitor parking, or on the street.

So far, Kyle and I have been trying to ignore it. Sure, we’ve thought about complaining. We’ve also thought about using the spot ourselves but choose not to because knowing our luck, that will be when someone complains.

Our problem is, do we complain, making potential enemies with the neighbours (they’re young and kinda douchey, so we wouldn’t really care), or do we ignore it? Being new and all, we’re apprehensive to raise a stink because we don’t want to be labeled as the Complainers.

What would you do? Ignore it or mention it to the Board?

Really, they’re not hurting us, but it’s not very respectful to park in your neighbour’s driveway, dead or alive.

Does anyone else live in a Strata complex? What are your rules like?