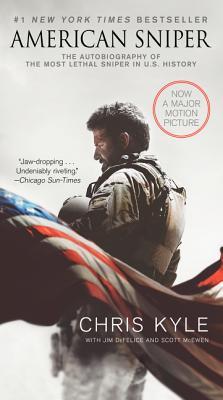 From Goodreads.com:
From 1999 to 2009, U.S. Navy SEAL Chris Kyle recorded the most career sniper kills in United States military history. The Pentagon has officially confirmed more than 150 of Kyle’s kills (the previous American record was 109), but it has declined to verify the astonishing total number for this book. Iraqi insurgents feared Kyle so much they named him al-Shaitan (“the devil”) and placed a bounty on his head. Kyle earned legendary status among his fellow SEALs, Marines, and U.S. Army soldiers, whom he protected with deadly accuracy from rooftops and stealth positions. Gripping and unforgettable, Kyle’s masterful account of his extraordinary battlefield experiences ranks as one of the great war memoirs of all time.

A native Texan who learned to shoot on childhood hunting trips with his father, Kyle was a champion saddle-bronc rider prior to joining the Navy. After 9/11, he was thrust onto the front lines of the War on Terror, and soon found his calling as a world-class sniper who performed best under fire. He recorded a personal-record 2,100-yard kill shot outside Baghdad; in Fallujah, Kyle braved heavy fire to rescue a group of Marines trapped on a street; in Ramadi, he stared down insurgents with his pistol in close combat. Kyle talks honestly about the pain of war—of twice being shot and experiencing the tragic deaths of two close friends.

American Sniper also honors Kyle’s fellow warriors, who raised hell on and off the battlefield. And in moving first-person accounts throughout, Kyle’s wife, Taya, speaks openly about the strains of war on their marriage and children, as well as on Chris.

Adrenaline-charged and deeply personal, American Sniper is a thrilling eyewitness account of war that only one man could tell.

My review:
I’ll say right off the bat that I watched the movie before I read the book. I bought the book for Kyle (my husband, not the author, obviously) for his birthday after we watched the movie in theatre and he said that while he enjoyed the movie, he didn’t LOVE it because of everything he had heard/read about Chris Kyle and the controversy behind, well, everything. I’m not going to delve into the politics behind Kyle’s (the author, not my husband, lol) experiences or the war overseas in general because to be 100% honest, I haven’t paid too much attention to it all. This is just a review of the book. I digress …

(And for the record, when I mention Kyle from here on out, I’m referring to the author, not my husband …)

Diving into the book, I found it to be a really interesting read, especially since reading it helped explain some of the events that occurred in the movie. The movie reflected the book almost perfectly, with the exception of a couple of events that were changed to make the movie more “Hollywood” I guess. (I won’t give anything away for those who haven’t read the book or watched the movie.)

It’s hard to really be critical about an autobiography, though, and this is only the 4th one I’ve ever read. I know a lot of skeptics have criticized Kyle for writing this book, but I think it’s a bold thing to do for someone who had so much first-hand, up-close-and-personal experiences with the war. You put a lot on the line when you lay out your life story like the way Kyle does.

He is also a relatable person, when you take away the war and the preconceived notions that he’s a “killer.” In the end, all he wanted to do was his job, and is that not what most of us want to do? Whether you live to sell stocks, bag groceries, or be overseas fighting for your country, it doesn’t matter; Kyle just wanted to serve his country and made that very clear.

I know everyone has their own opinion on the war, so before I start making things too political after I said I would refrain, I’ll nip this review in the bud. Overall, I still give American Soldier 4 stars out of 5. It was an extremely interesting and eye-opening read, and I definitely recommend those who are interested in the movie to read the autobiography instead.