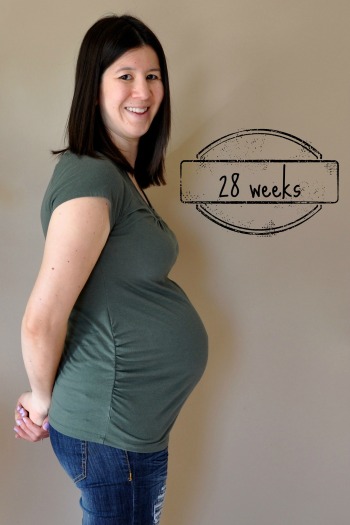 Size of Baby: About the size of a tropical coconut, according to my pregnancy app! I’m now also officially in the third trimester! Only 12 weeks to go!

Feeling: Not too bad, other than the usual nagging hip pain. I’ve been waking up at least once every night to go to the bathroom, and when I wake up I’m usually sweating to death. I blame the Snoogle, really.

Craving: I satisfied my hankering for a Vietnamese Spring Roll while I was in Vancouver on the weekend, so that was delicious. Now I’m really wanting bacon & hashbrowns for some reason, so on Friday I’m going to make that for everyone.

Other: I’ve started touching up the paint in the nursery. I did the trim yesterday and I still have around the window to do, but I have to buy a small can of paint before I do that. I also bought a lamp for the nursery while I was in Ikea and looked for some kind of artwork for the walls, but didn’t come up with anything. Here’s the lamp I got though. It’s really pretty and not too bright!

I also bought a cute little bunny stuffed toy from Ikea. Really, I could have gone REALLY crazy there, but refrained big time.

Also, while I was in Vancouver I hit up Old Navy thinking I’d be able to find some maternity clothes there for a decent price. Umm, not so much. They had NOTHING in my size and their maternity clothing was priced about the same as actual maternity store’s. Lame-o. I found 1 shirt for $10 and that was it. Isla got some cute new clothes though, so it wasn’t a complete bust.

Oh yes, and for those who care to hazard a guess, Baby Girl’s name starts with the letter “N.” Isla still insists it’s Ketchup though ;)

Flooring progress post. We're 1/3 of the way there! 😍
Breakfast club.
So lucky she's mine 🤪
"Excuse me ma'am, we'd like to talk to you about your home's insurance policy, but first - Are those treats in your hand?"