The high of my week was getting Isla’s hair cut on Tuesday. Her bangs haven’t been trimmed since mid-December and her hair was getting so long that it knotted SO easily. Have you tried to detangle a toddler’s hair? No easy feat! I was putting conditioner it in when I washed her hair just to make it easier to brush. Anyway, she got her hair cut on Tuesday, complete with trimmed bangs (I opted NOT to let them grow out), and about 2 inches taken off the back. Her curls are still there though!

The low of my week was a weird happening to Daphne. Sunday morning I heard Isla waking up so I got out of bed and helped her get onto the potty. After that, I went back into my bedroom to grab a sweater. Kyle was still sleeping, but Isla followed me in and Daphne got up to go out for a pee. I don’t know what exactly happened, but while I was getting my sweater over my head I heard Isla talking to Daphne and as I looked up I just saw Daphne fall over like a fainting goat. And then? She peed her morning pee on our nice, new carpet. I had to wake Kyle up because she was unable to get up and THERE WAS PEE. Kyle instantly thought she had a stroke, but she got up a few minutes later and there Kyle & I were, cleaning dog urine out of the carpet at 7:30 am. Joyous start to the day! Daphne is fine now, but man, having an old dog is tough sometimes.

An internet find I loved was the following YouTube video by College Humor, depicted what it would be like if Gandhi took a yoga class. Kyle had actually found it and made me watch it, and I laughed pretty hard, not because I’m one of “those” yogis, but because it just kind of goes to show how trendy yoga has become in some ways. (I will admit, I do own a lot of lululemon though, and I have no regrets about that!)

The best money I spent was $80 on stuff for Baby #2! I managed to find a used Ergo Performance (in green) & infant insert for $80 (A steal considering brand new those would’ve set me back about $180). A bonus was the Diaper Genie diaper pail the woman selling the Ergo carrier gave me for free!! She said she was purging and just offered it to me, otherwise it was headed to goodwill! We need a new pail because ours broke, and while I hadn’t decided what exactly I was going to replace it with, she saved me $35 if I had decided to get my own Diaper Genie. Score!

My favourite Isla moment was a completely unplanned meeting with a horse! We went for a drive just outside of town to drop off some deer meat at the butcher to have it made into pepperoni and there were a couple of horses at the fence feeding on hay. Isla saw them and wanted to go see them, so I figured, “Why not?” She calmly walked up to them and one of them approached the fence to sniff her. It was pretty cute! Isla got a little apprehensive about the horses after that (personal space was invaded a little), but she thought it was great. I didn’t mind either, although I’m sure the horses could sense that I was nervous, because the “friendly” one wouldn’t let me pet it. Ah well. 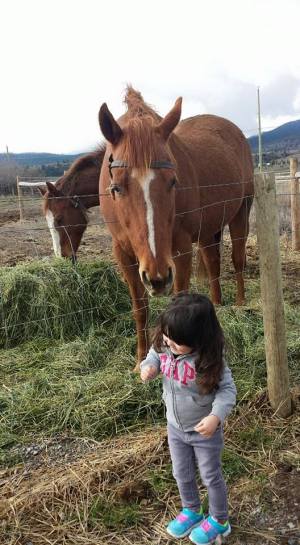 My favourite meal of the week was nothing, really. I made some beef kabobs on Thursday, but I feel like I fell into a bit of a rut this week. I attempted to make Greek potatoes, but they were a huge fail being underdone and kind of flavourless.

My plans for the weekend are an oil change for Vera this morning, mani & pedi tomorrow morning, and then Vancouver Sunday morning for Maroon 5 that night!! I’m looking forward to a little mini-getaway with my mom and some shopping on Robson Street + Ikea! It will be Kyle’s first time alone with Isla over night, so hopefully it goes good for him! (I’m sure it will – Isla adores her Daddy!)

What are your plans for the weekend?