Kyle and I had always planned on eventually moving Isla to a different bedroom once she got older. While we were originally going to make the move when she was to become a big sister, but since we had new carpet installed and we were moving furniture around anyway, we went ahead and relocated her ahead of schedule.

I also originally has plans to repaint her room, but with the new carpet I really didn’t want to risk getting paint on it. Instead, Kyle and I decided to let her eventually pick her own paint scheme if she wanted something other than the brown that’s currently on the walls. To make her new room seem more like a little girl’s room and less like the guest bedroom is was, we’re brightening up her space with bright accents and furniture. (Eventually she’ll have white furniture to match the bookshelf I redid for her.)

Other than that bookshelf, I also decided to repurpose some letters that spelled out her name. Isla was gifted it when she first came to the world, but we never did hang it because there was no real spot to put it in her nursery. Instead, I found a decent sized canvas at Michaels for $13 (with one of their magical 50% off coupons), took the (giant) can of purple paint that I had bought to paint the stripes in her nursery (seen here), and painted it. 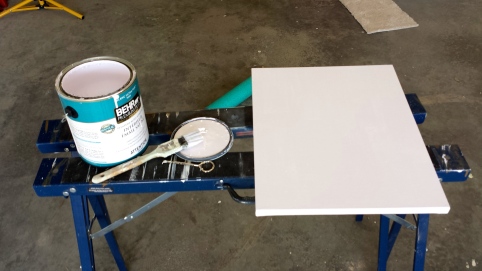 After the first coat.

It was super hard to see the paint coverage in the sunlight and I ended up missing some spots, so a second coat was definitely needed. The colour is definitely one that pops when it’s in the correct lighting!

After the paint had dried, I busted out the glue gun and simply glued the letters onto the canvas! It definitely could have turned out better, but when you’re dealing with wonky, uneven letters and hot glue, you just gotta eyeball everything and hope that everything is more or less even ;) Overall, I’m satisfied with my craftiness.

Please excuse the horrible lighting and wonky reflection. I swear, it looks better in person!

It really has helped brighten her room up, and Isla frequently points to it and says, “That’s Isla!” She also looks at it and attempts to recite the ABC’s, but whatever.