Check out Part 1 of my July recap here.

Just over 22 years ago, my mom took me to my first ever concert – the Backstreet Boys! A fan for life, I have been. So when it was announced that they would be coming back to Vancouver I just had to try and get tickets! Obviously, I was successful, and last weekend my mom and I road tripped once more to live out my fangirl dreams!

We left early Friday morning and made pretty good time getting into downtown Vancouver considering there was quite a bit of congestion and traffic. We were staying with my brother so we swung by his office to pick up keys and a parking pass before making our way to his place!

After dumping our stuff we took the sea taxi across to Granville Island to kill some time/pick up things for dinner while we waited for my brother to get off work. We also took a little walk along the beach before the humidity got to us and we had to retreat back to the apartment.

Once my brother got home from work we went out again to get a few groceries for breakfast and to make a quick stop at the liquor store. Fun note: I was asked to leave the liquor store for not showing my I.D. even though I wasn’t buying anything. (My brother was already in line paying and I was just standing there beside him.) So that was hilarious! We went back to the apartment and had an awesome dinner before venturing out again. Vancouver was gearing up for Pride Week, so there was a bunch of free entertainment going on by the Art Gallery, including Drag Queen dance lessons, so that was fabulous to watch!

Saturday morning I was able to check a run on the Seawall off of my Run Route Bucket List! One day I’d love to run the Seawheeze, but until I’m prepared for that, this was the next best thing. The views were pretty spectacular, especially as the sun rose over English Bay!

By the time I was done my run I was hot and disgusting, so I headed back to the apartment and sat myself in front of the fan while I waited for my mom and brother to wake up.

After breakfast my brother thought it would be fun to go to the Stanley Park Pitch & Putt. It was actually super fun and we laughed so hard! We were starving by the end of the round so we found a place to have some lunch. Lucky for me, they were still serving brunch, so I ordered a crab cake eggs benny with a pineapple margarita, and it was delicious!

After lunch we ventured towards Robson Street and meandered to the Jack Poole Plaza to check out the Olympic Monument solely because I had never seen it in person before. (#TouristMode) It was a little underwhelming but the people watching was good!

We slowly made our way back to the apartment to relax before ordering dinner (Door Dash is amazing in Vancouver) and getting ready for the concert! We were about a 1/2 hour walk away from Rogers Arena, so we left with plenty of time to navigate the streets and find our seats!

The opening act started almost right on time (which happened to the the 16-year-old son of one of the Backstreet Boys, which made me feel wicked old), and then … it was SHOW TIME FOR THE BACKSTREET BOYS!

Let me tell you, they seriously put on an amazing show, and I’m not just saying that as a life-long fan! They nearly performed for 2-hours straight, singing all of the classics as well as a few new ones off their latest album. The audience was electric and I am so glad that I got tickets to this show. My inner 11-year old is very happy with my adult self, is what I’m saying!

We arrived back to my brother’s apartment just around midnight and I promptly fell asleep, mostly because I was exhausted. (I logged just over 35,000 steps according to my FitBit!)

On Sunday we managed to hit the road at a decent time and casually made our way back home! As much as the break was wonderful, I missed Kyle and the girls and was happy to be reunited with them!

So with that, July was a pretty amazing month and I’m looking forward to whatever August has to bring!

What are some July highlights for yourself? Are you still a fan of a singer or group that you started listening to when YOU were a kid? Share in the comments!

Oh, hey there! Did you miss me? I totally didn’t mean to take a month-long break from blogging but life got a little crazy. By the time I realized that I hadn’t blogged in three weeks I figured a recap of what I got up to last month would be better way to update you all than a bunch of little posts. Ready? Okay!

Of course, Canada kicks off July celebrating the birth of our nation! In the past my mom and I head down to Riverside Park to take in all of the festivities, but this year we decided to visit the Farmers’ Market instead. I loaded up on some fresh, local produce, (and bannock!) and the girls enjoyed some treats as well. We spent the rest of the afternoon relaxing and enjoying the sunshine!

Isla spent five days camping with my mom and stepdad during the first week of the month and she had an amazing time. It was rather strange only having one kid at home for those few days, but I think both Norah and Isla appreciated the time apart from one another. Unfortunately, the camping trip was cut short by a day because the smoke from the wildfires that had suddenly popped up all over the interior, but my mom did take this amazing picture of Isla during the tail end of the trip:

I’m pretty obsessed with this photo and how it captures every essence of childhood. <3

And yes – the wildfires. Kyle had two weeks of holidays this month and depending on how you look at it, they were timed either very well or very poorly. On his first day off his dad and his girlfriend were evacuated from their home in Cache Creek due to an out-of-control brushfire that was sweeping through the community. Of course, we offered our home to them they stayed with us for about 10 days before they were allowed to head back home. Great timing for Kyle to be off – he was hoping to spend some time with his dad anyway while on holidays, it’s just unfortunate that it was under these circumstances! Of course, Isla and Norah were just happy to have their grandparents visiting!

It was too bad that it was so smoky though – there were a couple days where you couldn’t even go outside for more than 30 minutes without your throat starting to itch. It really put a damper on some of our plans.

These two photos were taken 24 hours apart from the same vantage point. You can see the smoke from one of the fires down in the valley of the top photo.

Eventually the smoke cleared up and the weather got hot enough to enjoy the last few days of Kyle’s time off!

We’ve been wanting to go to the waterslides for quite some time but have never been able to due to weather, pregnancy or what have you, haha. Since Kyle’s sister was in town because her and her family were also evacuated from their home in William’s Lake, we invited them and Kyle’s mom to come with us to the slides just outside of Vernon. The weather turned out to be amazing and the girls had an absolute blast! Isla was apprehensive about going down the slides by herself, but after we asked if she’d go down if she was wearing her lifejacket and she agreed? We couldn’t stop her! I practically had to pin her down to stop and hydrate and eat! And I was so nervous that Norah was going to hate them but she had just as much fun as Isla doubling with either Kyle or myself. They were both exhausted at the end of the day and slept SO GOOD that night, even with their naps on the way home. #parentingwin

Kyle also busied himself by making a bed for Norah! We had Isla’s made by someone in town, but Kyle thought it would be a fun challenge to try and make a similar “big girl” bed for Norah while he was off work. He did an awesome job, IMHO, and Norah loves it! I swear it’s even helped her sleep a bit better through the night. 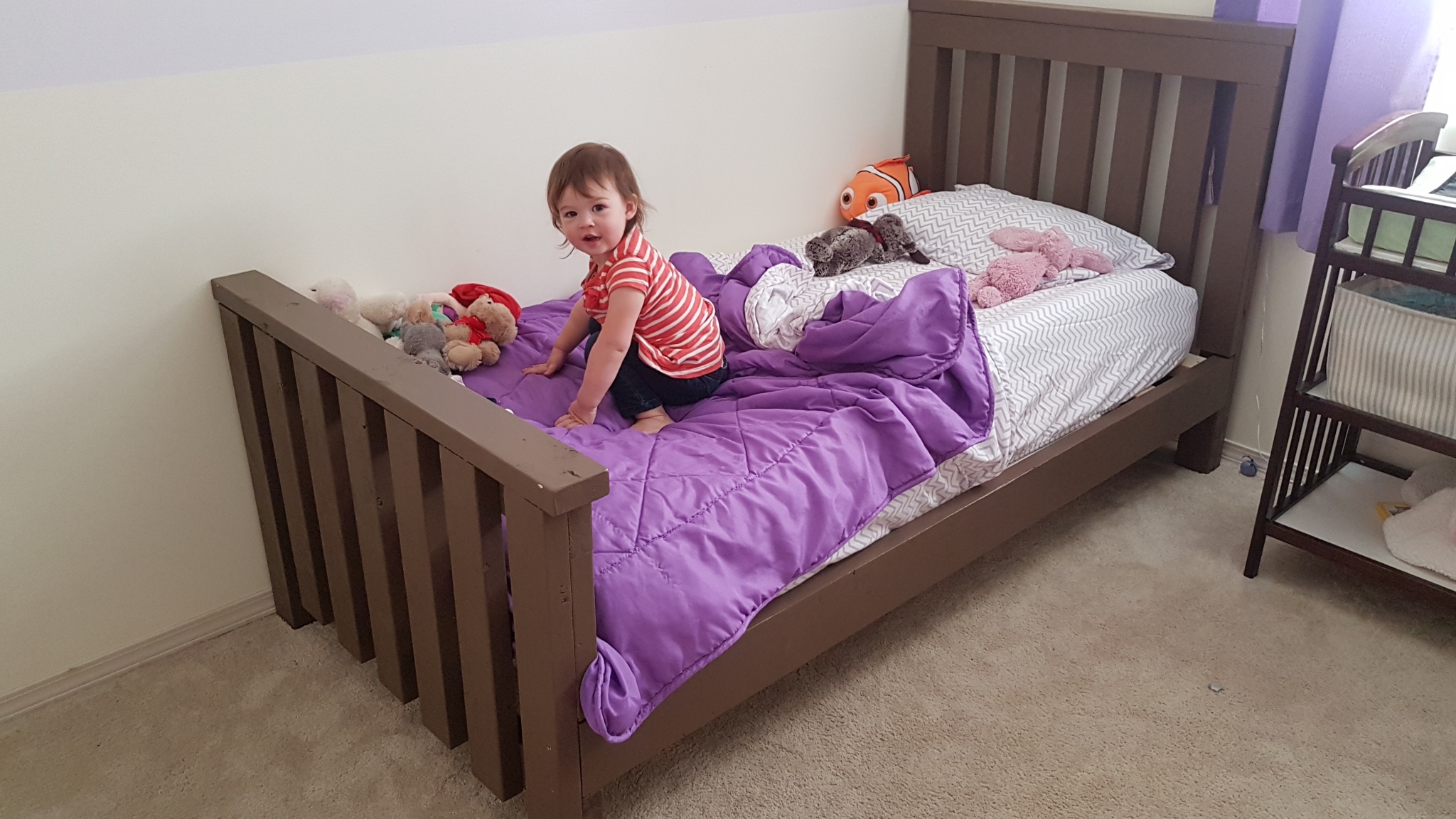 Kyle and I had always agreed that Isla could get her ears pierced if she asked for them herself. We kind of always figured she’s ask one day, it was just a matter of when. She had originally asked back in June, so I told her I’d talk to her dad about it and we’d go from there. We agreed that if she asked about it again, we’d make her an appointment and take her. She finally asked me a couple weeks ago if I had “talked to dad about her getting her ears pierced,” and then she asked him directly at dinner, so we figured she was honestly ready! I called and made the appointment, and Kyle got the honour of taking her to the studio to get them done! She handled it so well and is very proud of them! Me? I’m sobbing on the inside because she’s no longer my little baby :(

What else? We got in a few pool and waterpark days, the girls had their annual check-ups, (doctor, eyes, and immunizations for Isla, doctor for Norah), I had my wind-up slo-pitch tournament, Isla did dance camp, Kyle found a toad, we ALL overindulged in the best way possible, including hosting a “Christmas in July,” and just had a great time as a family! While there were a couple of low moments overall it was a great first month of the summer. I cannot believe how quickly July few by, and now August is here. I hope we can make this month just as memorable!

How do you bathe a 90lb German Shepherd? You don't. You just throw a bunch of water around, pray he'll stay in the tub, (Hint: He won't) and live by the words, "Good enough!"
Garden prep sidekick. If he could plant anything, it would be 🥓
So lucky you two are mine. ❤️
Little pit stop at @sinamenbunco in #yxx before we head home 🤤