Happy Monday, everyone! I hope it’s not too smoky where you are; it cleared up just enough over the weekend to enjoy the outdoors, although now it seems to have blown back in. (Probably due to the rain – hurray!)

Kyle’s was away so I was in “Keep the kids busy so I can keep my sanity” mode for most of the weekend. Here’s what we got up to:

Friday
Kyle headed out shortly after Norah woke up from her nap, and I had already made the decision to let Isla choose what we’d have for dinner. She told me she wanted sushi for dinner, so I thought it would be TOTALLY manageable to take both girls out to a sushi restaurant and sit down instead of ordering takeout. While there were a few moments where I thought about leaving, we had a good time and enjoyed our meal! 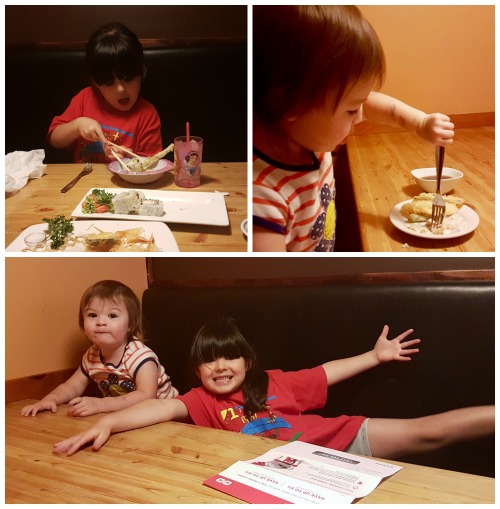 After they ran their sillies out in the backyard for a bit it was time for baths and bed. After tucking Norah in I figured I’d let Isla stay up past her bedtime to watch the new Beauty and the Beast and have a “slumber party” with me. She had wanted to watch it in the theatre but I’d heard mixed reviews on how scary it was for younger audiences, so I thought I’d “screen” it myself in theatre and just let her watch it at home. That way, at least if she thought it was too scary I could just send her to bed and keep watching it myself.

As it turns out, she didn’t find it scary at all! She really liked it and kept comparing it to the animated original, noting how the songs sounded different. She was pretty tired by the end (it was 2 hours past her bedtime), so she crawled into my bed and crashed hard!

Saturday
There’s an annual classic car show that takes over downtown every year, so I thought it would be a nice change of scenery to take the girls to check things out. I don’t think Isla enjoyed it as much as she thought she would, but she did get a bunch on helium balloons to make up for everything!

There’s an little cafe/donut shop that I’ve been dying to try out, so I finally decided to pop in while we were downtown. I let Isla pick out a donut and it was SO good! If you’re ever in town definitely check out PDK Cafe on Victoria Street!

We came home for lunch and Norah’s nap and then just relaxed until dinner arrived. Hurray for pizza delivery! After dinner we decided to go for a walk to the playground to burn off some energy. Both girls had fun ripping down the slide but we had to unfortunately head home early as it was starting to get stormy.

Sunday
We didn’t get up to much on Sunday. The girls watched a movie in the morning and played inside for most of the day. The sun tried to come out but it didn’t stick around long enough to dry out the lawn from the rain that fell overnight. While Norah was napping I tended to the flowers and tomato plants and found this nasty little bugger eating Kyle’s tomatoes:

Tomato worms, or hornworms, are ENORMOUS and are disgusting! I managed to get it off of the plant and after I took the above photo I promptly slaughtered it. *barf*

The girls went to Kyle’s mom’s for dinner and I headed out to play slo-pitch. It was SO COLD for August and I’m glad I didn’t wear shorts like I had originally planned. Even in capris and my jersey I was still freezing. The heated seats and heat definitely came on in the car when I left the field.

The girls went right to bed after we got home and I watched a horrible movie on Netflix before turning in myself.

That pretty much sums up our weekend! Kyle’s concert is this evening and then he’ll be home on Tuesday! Hurray!

How was your weekend? And how’s the smoke where you are?

Such an amazing time at the @downtownkamloops Santa Parade as always! The big kiddo danced her heart out in the parade and even finished in time to see the big guy himself ❤️🎅🏻
She gets down on herself HARD when she doesn't meet her own expectations on her spelling tests. A deal was made with Dad that if she practiced hard and aced her test, she'd get a special treat.
Just the best good boy modeling his spiffy new bandana. 🤠
Just a 90lb lap dog, breaking the "No dogs on the furniture" rule as usual. 😜