A high of the week was  getting the Christmas stockings I started last weekend all finished! I’ve been wanting the get matching stockings for our family for the longest time, but I could never decide if I wanted to make them myself or just order them off of Etsy. I finally decided I would go the DIY route, and with a little help from my mom’s coworker who sews and quilts, I got off to a pretty good start. Once I was on my own though, I measured the cuffs in correctly and the sewing machine broke,* so it took me longer than expected to finished the rest. But, in the end I love the way they turned out!

*By broke I actually mean than something normal happened but because I have no idea how a sewing machine operates I thought it was broken and spent an hour trying to “fix” it. The bobbin thing needed more thread on it. Who would’ve thought?!

A low of the week was hearing that a friend’s mother in law passed away due to cancer. :( I just hate that damn “C” word so much.

An internet find I loved was the Gilmore Girls revival, but I’ll be honest, it was a love/hate find. I loved the entire series and was disappointed with how it ended, and the same can be said for the revival. While I know WHY it ended the way it did, I was still left with the feeling of wanting more.

The best money I spent was on Christmas presents! I’m 90% done my Christmas shopping with only one more person to buy for and then I can hole myself up in my house while the rest of the public can battle it out in the stores.

My favourite Isla and/or Norah moment was watching Isla perform in her preschool’s Christmas concert. She did awesome up on stage and everyone in our families who came to watch were super proud of her!

And yesterday my dad was in town doing some shopping, so we met up with him for sushi and Norah entertained us all with her bizarre eating tactics. She’s such a goof! 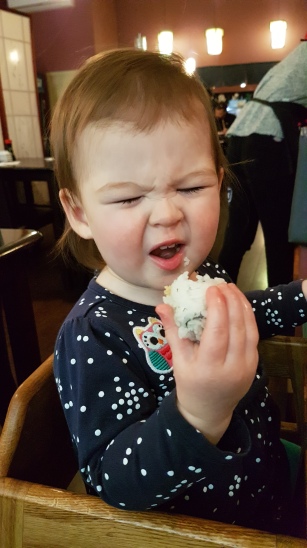 Oh, annnnnnd Isla was flipping through a little local Christmas events flyer/magazine the other day when she pointed out that I could buy a “pretty” Santa costume for Christmas. Umm, no thanks, kiddo! 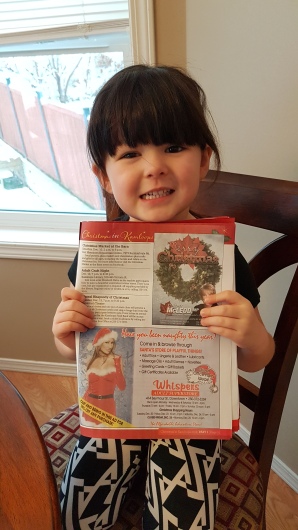 (That advertisement is for an “adult” store in town.)

My meals of the week were

What are your plans for the weekend??

Ridiculously festive outfit? ✔
All ready to Holidazzle Dance their faces off! Tap for Norah, ballet & jazz for Isla, and they rocked it! #biasedopinion
Let's do this, December.
Santa Parade: Done! Norah loved it all (the best part of course was Santa) and Isla performed with her competition team. Bring on Christmas!