I’ve found that one of the biggest challenges I’ve had with going back to work is having the energy to make dinner when I get home. Some days I’m just plain ‘ol DONE and if Isla is being especially cranky? Oh boy. Like last Thursday I had grand plans to fry up some chicken with all the trimmings, except I had a horrible headache, so I ended up barbecuing the chicken, boiling some pasta and pouring Alfredo sauce mix out of a pouch and into a pan of milk.

Anyway, this week I thought I’d document my weekly meal creations. I ended up trying a new recipe, leaning on a couple go-to’s, and taking advantage of the nice weather we’ve been having and using the barbecue. (Hello, less mess afterwards to clean up!) When it comes to dinner, Pinterest is my best friend!

I decided to try out a new recipe I found on Pinterest last week – Spicy shrimp pasta in garlic tomato cream sauce. It was SUPER easy to make but it was lacking in the flavour department. (I did cut back on the red pepper flakes because Kyle and Isla don’t do spicy food.) The taste reminded Kyle and I of Lipton Sidekicks and besides the shrimp, Isla didn’t want to eat it. (I don’t know if it was because she was sick, or if she genuinely didn’t like it.) Either way, it would’ve been better as a side instead of an entire meal.

No photo because I totally forgot…

This is one of my “go to” meals and it varies from being baked in the over or just done on the stove with tomato soup. On the stove is faster, but Tuesday is my day off work so I went with the more “labour intensive” version. There’s no recipe since I just have it in my brain, but I usually just add salt, pepper, onion powder, garlic powder, an egg, and a dash of Worcestershire sauce to the ground beef. I sear the meatballs a little bit in a pan, then pop them into a casserole dish with 2 cans of mushroom soup and some sliced up mushrooms and celery. It goes into the oven for about an hour at 350°F and gets served with rice when it’s done! 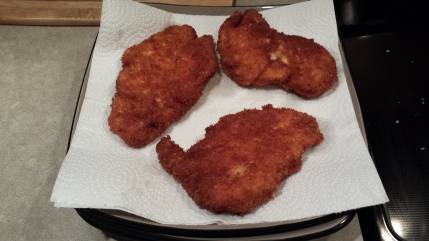 Fried chicken can be safely categorized as a comfort food for Kyle. His grandma made it all the time for him when he was a kid and I’m proud to say that I’ve mastered making it. While I’ve put my own twist on it, I think his granny would approve! I pounded out the chicken with a meat mallott and then dredged the breasts in flour mix that has salt, ground black pepper and a touch of cayenne pepper. After it’s coated with flour, it’s dipped into an egg wash (one egg is usually just enough for 3-4 decent sized chicken breasts), and then into panko crumbs. I used to use just crushed up soda crackers, but the panko adds an amazing crunch. I fry it up on both sides in vegetable oil for about 10 minutes a side on medium-high heat, and it’s done! (FYI a splatter guard is very handy keeping the hot oil in the pan!) The standard side dish for this one is mashed potatoes. Comfort food at its finest!

No photo because I forgot (again) …

I’ve had a hankering for something nice and saucy, so I figured I’d toss some mild Italian sausages onto the barbecue for dinner and douse them with homemade barbecue sauce. We used to buy bottles of ‘cue sauce at the store all the time, but they’d either expire or we’d use a whole bottle in one go and it would be almost a waste of money. (We like sauce, what can I say?)

Last summer while on Pinterest I came across this recipe for homemade sauce and let me tell you – it’s SO good! I let it simmer for about an hour and it has the best consistency ever.

Anyway, all I really do is boil the sausages for 10 minutes or so before tossing them on the grill for another 15-20 minutes. I served them up with carrots and rice, and it was the best ever. In fact, I can’t wait for lunchtime today because that’s what I brought with me to work.

Lucky me, I get the night off from cooking since it’s Kyle’s birthday tomorrow, so we’re heading to his mom’s for a family birthday dinner tonight. In my mind, any night I don’t have to cook is a good night! Roast beef with all the trimmings is what’s on the menu.

I think the smartest thing I do when it comes to cooking dinner every night is to sit down and plan my “menu” for the whole week before I head out grocery shopping on Sundays. If I don’t plan what I’m making I definitely end up making crap food, or at least food that’s not as healthy as it should be, such as the packaged Alfredo wonderfulness from last week.

What was your favourite meal this week? How do you plan dinners?

One thought on “Meals of the Week v.1”