When I first learned Kyle and I were expecting Baby #2, I almost immediately thought about whether or not I should do week-to-week pregnancy posts again. While I enjoy looking back at my weekly update posts when I was pregnant with Isla, it was a lot of work to take the photo and fill in all the blanks.

Eventually, I decided to go with taking baby bump photos every other week. I think you’ll see more differences between weeks, and it’s less work for me. (Ha!) Also, instead of the huge batch of fill in the blanks, I’ll just do a handful of them instead. Easy, peasy!

So, without further ado, here’s my 16 week update: 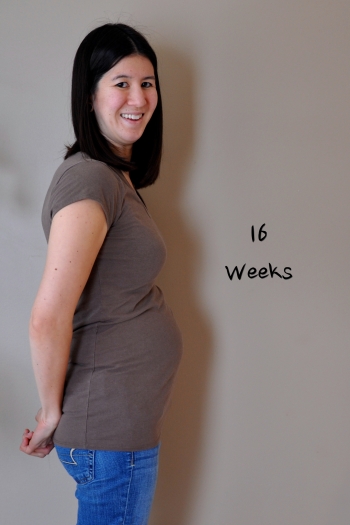 Size of baby: A dill pickle, according to the Ovia Pregnancy app. Last week it was the size of an avocado, so I’m assuming it’s a pretty big dill pickle ;)

Feeling: Okayish. On Monday morning I think I was having some low blood sugar issues because I suddenly got really tired and shaky, but felt better after I DEVOURED two PJ&B sandwiches. Other than that, my hips have been killing me (sciatic nerve pain, I’m guessing), and I keep getting wicked headaches. (I blame the stoopid weather.) Ugh. Kyle swears that this pregnancy has been harder on me than Isla’s was, and I’m pretty sure he’s right.

Craving: Nothing is standing out too wildly right now. Salty foods are more appealing that sweet, which according to the old wives tales says that this bambino is a boy. ;)

Other: I have my next prenatal appointment on Tuesday next week, although my usual doctor is away on holidays so I’ll be seeing his fill-in instead. It’s hard to believe I’m already moving into the forth month of pregnancy! I should be getting a call at some point in the next week or two to make my anatomy ultrasound appointment, a.k.a the appointment where we find out if Baby #2 is a boy or girl! I’ve created a little Google Doc Baby Pool, so feel free to click the link and put your guesses in if you want!

My old lady hands are hideous but I need to share the fact that I can finally (comfortably) put my wedding rings on after straining my finger three months ago 🙌🏻
Meet Nutella and Peanut Butter 🐌🐌
One year later ... still inseparable.
Home office donut 🍩