I’m getting married in about three months. THREE! Gaaah! The crazy dreams have started. Tuesday night is was my dress getting lost and me wearing a black slip dress down the aisle and a Welding Convention happening at our reception venue. At least it was on a beach? Last week it was the guys showing up late, they were wearing Carhartts and it was SNOWING. Oh lordy.

In the next three months we have to: make the favours, make the table number holders, buy stuff for centerpieces, get my gown fitted (which still hasn’t arrived!), get the guys measured up for the their tuxes, pick the rest of the music, buy the marriage license …. I’ m pretty sure this list could go on forever!

Now, onto the budget. I’ve been trying to figure out the best way to display how we worked everything out. Really, we didn’t have a set budget. There was a bit on the news the other days that said that average cost for a wedding in Canada was about $25,000! Luckily, our total thus far is was under that – about $11,000! Not too shabby, right?

We’ve been using Microsoft Excel to keep track of everything: 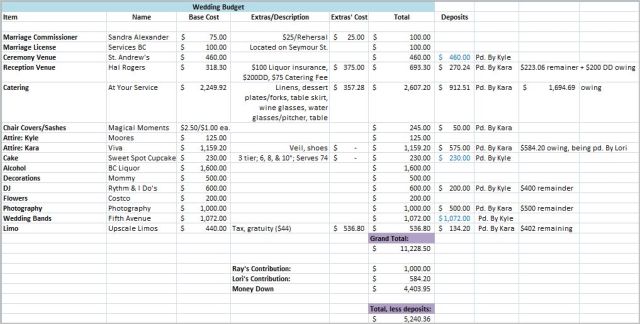 Basically what we did was list everything that we needed and tried to figure out how much we wanted to spend on it. There were fixed costs, such as the marriage commissioner and license, that we have no control over, but everything else was somewhat flexible and under our control. From there, it was all estimates.

We budgeted high for everything, hoping that we’ll come under budget on most things, especially the liquor and decorations. And another important thing was making sure we included what we’ve already put money towards and how much we still owe on things, such as my dress, photography and the DJ.

Really, I’m horrible with budgeting and numbers, but having everything laid out in front of me like this really helps me remember where we are and what still has to be taken care of. Please, if you have ANY questions – ask! I’ll be more than happy to share any details on how we budgeted without budgeting. (Like the limo? Totally wasn’t on our list originally but we’ll be oh-so-gangsta! lol)

How do YOU budget for events?